Entrepreneur, author and Emmy-nominated tech media personality Randi Zuckerberg is trying to focus on seeing some of the good that’s come out of this devastating global pandemic.

“I’m delighted that technology can help keep us connected,” she said during her keynote presentation at PRSA’s ICON 2021 on Oct. 7. “And I see an opportunity to be more creative.”

While she’s known for her entrepreneurship today, Zuckerberg dreamed of being a Broadway singer growing up. But after graduating from Harvard, she took a job at Ogilvy, and was staffed to a new type of team they started: digital marketing.

“I thought it was a dead-end job, but it turned out to be the fastest-growing team within two years and was very exciting to be a part of,” she said during the session hosted by PRSA Chair Michelle Olson, APR.

The founder and CEO of Zuckerberg Media talked about receiving a call from her brother, Mark, to help with digital marketing for his new venture, which was called The Facebook at the time.

“There was something so special and exciting about being in that startup culture,” she said, noting that a one-week trip to California turned into a 10-year stay as the 12-person company that grew to employ tens of thousands of employees globally.

However, Facebook faced the same obstacles as other Silicon Valley startups in the early days — no resources and competing companies, she said. So, they leveraged the power of the “hackathon,” where coders, designers and engineers had to work on something totally different than their day jobs to get creative and test out new ideas.

“It frees you up from a fear of failure. We go through so much of our lives being afraid to fail. We’re so afraid to put new, creative ideas out there. We’re afraid of being shot down, afraid of looking silly or stupid,” she said. “But inside of us are all these amazing, creative ideas. When you’re put inside a situation like a hackathon… where there’s no risk or sense of failure… suddenly, brilliant ideas come out of people.”

One of Zuckerberg’s hackathon ideas turned out to be a big hit — eventually.

So, she interviewed people on her “TV show” and “went live” from a closet at the hackathon. But only two people tuned in — her mom and dad. Discouraged, she left in the middle of the event.

But somehow, people heard about it. She received a call from Katy Perry out of nowhere. She wanted to announce her upcoming world tour on Facebook’s “TV show” she had heard about.

In January 2011, Facebook Live debuted, Perry’s tour sold out in minutes and, suddenly, celebrities, politicians and world leaders all wanted to use the platform to speak directly to this audience. 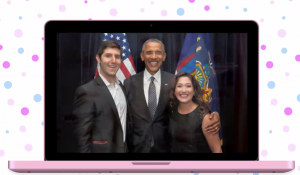 “Now, 2 billion people have access to stream live,” she said, noting how exciting it is for the vision she had to become a reality. “Every single one of us is now our own media company and our own TV studio.”

Putting your ideas out there

When first setting out to California, Zuckerberg didn’t think of herself as an entrepreneur.

“I thought I was a marketer. I was someone behind the scenes. But if I could go back and tell young Randi one thing, I would go back and tell her: ‘No matter what your job is, no matter what company or what role, every one of us is an entrepreneur. Every one of us is sitting on that 2-billion-person idea, as long as you can get of out your own way and not be afraid to fail and not be afraid to put your big, wild, creative ideas out there.’”

But then, after such a big success, Zuckerberg decided to quit her job.

“I loved what I was doing, but I was also tired of being the only woman in every room that I was in in Silicon Valley. What I got out there, you could count on one hand the senior woman in tech. It’s a little better now, but there’s still so much room to grow,” she said.

“I had these increasingly complicated feelings about both being excited and thrilled for the future of tech, but also seeing this burning problem that I wanted to solve.” (She noted that only about 2 percent of venture capital goes to women, and roughly only 40 total women of color have ever raised over $1 million in financing.)

Zuckerberg and her family moved back to her home state of New York, noting that she never forgot her dream to sing on Broadway. She appeared in the musical Rock of Ages, and helped produce Hadestown and Oklahoma! before New York’s theater and arts industries closed for almost 18 months due to the pandemic. This time also forced her to revisit her own relationship with technology, she said.

“I want to recognize how difficult this year has been for so many of us, and it’s ongoing, while at the same time being so excited about what the world that lies in front of us can give us if we adopt that entrepreneurial, hackathon way of thinking about our careers and our companies.”

As Zuckerberg looks to the future, she points to some trends and lessons learned.

“When I started my career, businesses did not take a stand. If there was a hot-button topic in politics, in environmental issues, you backed far away for it,” Zuckerberg said. “But today? That doesn’t fly. As a company, you have to take a stand; you have to have a point of view on important issues. Customers demand it. Employees demand it. The markets demand it. People expect you to have an opinion on big issues.”

“I’ve heard the word ‘authentic’ thrown about for the last two decades of my career. It was one of these words that you sprinkle into [presentation decks]. Only in the past few years have I seen brands come around to this. While we’re making great strides in diversity, we’re also seeing one step forward, two steps back. This needs to be something that isn’t just ‘slacktivism’ that we post on social media, but we don’t actually make the changes inside our companies. We all need to do better.”

• Breaking through a crowded scene

“Personalization — whether it’s using AI or machine-learning tools — to make marketing pitches and press pitches more personal is going to be increasingly key in breaking through this very noisy and crowded world that we live in.”

“Audio is one of the biggest trends that I have my eye on these days. Audio is one of the frontiers left where you get someone’s almost undivided attention. There’s an intimacy with audio, and an ability to go deep and have difficult conversations. Audio is a powerful tool for marketing and for our businesses.”

• Understanding a new breed of influencers

“Influencer marketing is constantly changing. It can be an exciting beast, but a difficult one. This is where tech tools like AI will be helpful with matching brands with the best influencers. We’re going to start seeing technology play a bigger role in helping us to figure out who are actually the best spokespeople for our brands.”

“The ability to own your own story (through audio, a newsletter, text marketing or otherwise) is something I so deeply wish I had at the start of my career. I spent my career telling other people’s stories; so now I’m telling mine. It’s amazing to see the ROI of putting your own messaging out there.”

Zuckerberg also cautioned the audience not to be fooled by how ideas become a reality: “Especially with social media and the press, we mistakenly think things are overnight successes. But behind every ‘overnight success’ is a career of work behind it.”

As far as finding work-life balance, Zuckerberg doesn’t buy into it.

“We talk a lot about work-life balance. Unfortunately, I don’t really believe it exists. I wish it did. If you want to be truly excellent and committed to something, then you have to give yourself permission to be well-lopsided instead of well-balanced at any given time in your life.”

Zuckerberg then presented “the entrepreneur’s dilemma,” saying that busy people can only pick three of these five areas that most people consider essential to focus on at one time: work, sleep, family, friends and fitness.

“Instead of trying to be everything to everyone and ending up pleasing no one, just pick three and give yourself permission to be lopsided in some of these ways,” she said, adding to focus on being great at just a few things “and take away the guilt of what you’re not doing. Something has to give. We want to do it all, but the reality is: We can’t do all of it well.”

Amy Jacques is the managing editor of Strategies & Tactics at PRSA.